ATTENTION    BEGINNING  SCREENwriters:   GET  your  virtual  copy  of   HEMOBLAST   TODAY! 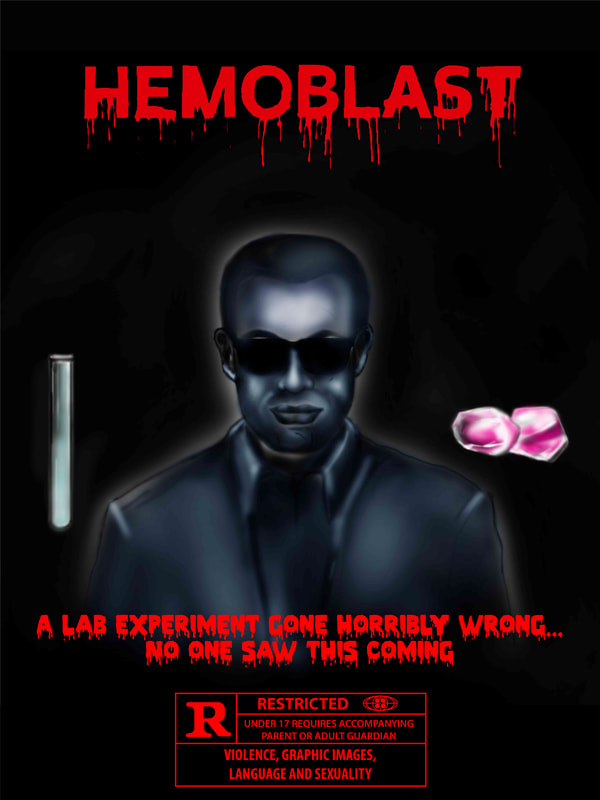 ​Learn the art of screenwriting by dissecting this movie script and novel.  A classic Sci-Fi thriller that is stillborn in terms of production and release in theaters.  Below is a synopsis of the feature length film:
HEMOBLAST THE MOVIE - SYNOPSIS - COYRIGHTS  2017, 2019  ALL RIGHTS RESERVED
​
At the tender age of 11, Dennis James had already felt the intense pain a lifestyle of drugs can bring. His older brother was killed during a drug-related shooting and his mother was imprisoned for felony drug possession. Before she was sent away to prison, Dennis’s mother made him take a vow that he would never be involved with drugs. Fast forward 10 years later and Dennis has achieved much in life under the love and care of his adopted, white parents, the Arringtons, who reside in an upscale suburb of LA.

Dennis is headed toward a sterling career as a chemist and is on the verge of graduating from a top Science/Chemistry University. Fate deals Dennis a cruel blow as he is blinded during a lab experiment gone wrong weeks before his graduation ceremony. Months after the accident, Dennis’s cousin Robert Taylor, a hustler and marginal member of the LA Whoogees Crips Gang, re-connects with Dennis.
Robert tempts Dennis with an offer to work for the gang and create a new synthetic street level drug for huge profits. The gang would hire a lab assistant to help Dennis create the new drug. Remembering his vow to his mother to never be involved with drugs, Dennis declines Robert’s offer, and accepts a part-time job with his college mentor and teacher as a student aide at his alma mater.

Dennis is content with his “new normal” and rarely comes across Robert. All is well until Dennis finds out his adopted mother has been stricken with a rare form of cancer. Medical bills mount for Dennis’s adopted parents, and they are now on the verge of losing their home...Possessed with a sense of responsibility to aid his struggling parents, Dennis re-considers Robert’s offer to design a synthetic drug for sale and profit. Robert subsequently introduces Dennis to Jeffrey “Creeps” Williams, the leader of the LA Whoogees street gang.

A short time later, Dennis begins to skirt his responsibilities as a student aid assistant and spends more and more time perfecting his new synthetic drug formula for the gang. Before too long, Dennis has concocted in his mind what may be one of the most addictive synthetic drugs ever known to man - but there is one big stumbling block… According to Dennis’s calculations and proposed formula there is one missing main ingredient he needs to make the “killer” synthetic drug - blood. Human or animal blood. Highly skeptical and dismayed by the news Dennis gives him regarding the completion of the drug, Creeps Williams is about to bow out. However, with the news that rival gang members have been moving in Whoogees territory and making drug deals, Creeps gives the green light for his gang members to round up the needed blood.

What follows is truly amazing. A short time after Dennis completes his drug and it hits the streets of Los Angeles, the drug becomes the craze of the underground drug world. It is given the street name “Red Rock”, due to its unusual pink, reddish hue,caused by the blood. The drug quickly creates a stir and creates repeat customers who can’t get enough. Users say the experience of using Red Rock is better than sex. The Whoogees are now back in control of the drug sales war in the city of Angels. The only problem for Creeps and the Whoogees is the almost comical manner in which the gang members have to keep supplying the blood line for the drug. Several months after Red Rock hits the streets, it catches the attention of law enforcement and the national media. It is the new king of the drug world. As with any illegal drug, there are always dire effects and a bad side to its use. No one saw it coming - not even Dennis James, its creator - no, none could have ever imagined what was about to happen to anyone who continued to use Red Rock for approximately three months. Depending on the users own blood type - A, B, AB or O - very strange things start occurring at the three month mark of usage. Some users experience intense demonic visions, others have the compulsion to taste blood, while others become victims of spontaneous combustion.

Detectives James Harris and Lawrence Chen of the LAPD drug unit are on the case and trying to crack the origins of “Red Rock”. Smart enough to know the heat is closing in Creeps Williams, changes the location of producing the drug to strategic locations across the nation. Dennis has quickly earned enough money from the drug to save his parents’ home. Creeps Williams realizes he can’t keep up the Red Rock game much longer, as law enforcement is closing in. He then decides to hold Dennis James hostage and pressures him into creating another synthetic drug, one that doesn’t require blood. However, the formula for Red Rock has been made known across the country in the underground drug world and bizarre, very scary incidents continue for anyone who gets hooked and reaches the three month mark of using. Eventually, Creeps and the Whoogees are busted and Dennis James is rescued, But the question arises - what was Dennis James doing in a laboratory created by a street gang? Charges are eventually plea bargained and Dennis is placed on formal Probation for three years, because no one can believe a blind man could be the reason behind this global pandemic . The legend of Red Rock is created and still burning.

There are many parts to  building a screenplay. It’s a mistake to think you just sit down and write one. A screenplay, like an automobile, has many components, and they must be arranged and  fastened  in the right places. There are thousands  of parts to a car, as is the case with the construction of a screenplay. However, all of those thousands  come  from  these  ten  major  building  blocks. Take  care  of  these ten  screenplay essentials, and you will – without a doubt – end  up with a better script.

With  this  purchase  you  will  learn  the  10  pillars  of  successful,  professional  screenwriting:

MELIO
Send any inquiries regarding your purchase or the Hemoblast movie script to:  hemoblastscript@gmail.com

Scout Ready Privacy Policy:
scoutready.com uses www.opentracker.net to collect visitor data and analyze traffic on our site. This information helps us understand customer interests and helps us improve our website. When you visit our site, the pages that you look at, and a short text file called a cookie, are downloaded to your computer. A cookie is used to store small amounts of information. This information is collected for traffic analysis only. The cookie does not contain personal details. Depending on the browser that you use, you can set your preferences to block/ refuse cookies, and/ or notify you before they are placed. Opentracker does not sell, give, or trade the statistics they store to any 3rd parties for data-mining or marketing purposes. Please visit www.opentracker.net for their privacy policy.